Gramps got the fever back in 1925. It came suddenly, stealing this rugged rancher from Gra’am and their 13 children.

The fever was epidemic. It seemed at first that Gramps would be strong enough to escape its grasp. He was proud of his herd of beef cattle, his covey of children and the vast acreage of range land that was his ranch.

But one morning, long before sunrise, he’d set his pick, shovel, a backpack, hunting canteen, and stout rope in a heap outside the kitchen door. When he came in later from finishing his chores and sat down to pork and eggs, homemade biscuits and freshly churned butter, Gra’am knew it was all over. He was restless, as he gazed far off across the fields, seeing things she couldn’t, and if she did, wouldn’t care much about. She knew then he’d be gone by dark and most likely wouldn’t be seen alive again.

As he sat down to eat, he said, “Ma, I been thinkin’. It’d only take one claim…just one… Them hills’r teamin’ with gold and I jus’ gotta go make our fortune.”

Gra’am said nothing. She knew…

Jake ‘n Sam’r old ‘nouf to care for the ranch and tend the farm. The rest all know what chores they’re responsible fer. I’ll take jes’ a sack of flour, salt ‘n a can o’ lard. I’ll be back by the firs’ snow.”

She choked back a sob for she knew she’d never see him alive again. She’d seen it happen to Hansen over the next ridge just last year. They never did find him. But Gramps was a proud and stubborn man. He didn’t take much to having anyone interfere with his plans, even her. She couldn’t stop him…wouldn’t even try.

And so, by end of day he was gone.

Gramps went alone into the mountains. He prospected the back hills, dug into the craggy mountains and panned the cold highland streams for just one hint of “the big’un”.

Gra’am and her brood got along fine that summer. They were all tough, weathered mountain folk. And they knew how to go on day by day with the assurance that nature would take its course and be kind to those who paid the price of survival.

Gramps didn’t return with the first snow. or any time that winter. When the spring thaw came, he was found outside the south pasture fence. His was the form of a man almost beyond recognition. His sun-parched skin was drawn taut; his bony, gnarled hands and knobby knees, twisted. His teeth were broken and stained, his eyes sunk deep into his skull. Even a stranger could see from his vacant expression that he had not found his dream.

Gra’am buried her husband beneath the old aspen stand at the edge of the stream which meandered through the rich land he’d loved. 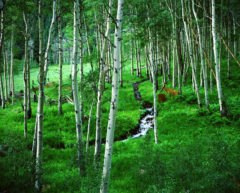 The day his sons dug the grave, they rested on the edge of the stream. Jake stooped to dip his neckerchief into the icy mountain stream to moisten his brow. But he never did finish. Instead, he gave a startled cry of surprise. “Sam, c’mon here. Lookee, see.”

There embedded in the mud were hundreds of golden flecks glittering in the stream-washed mud.

Thar lied Dad’s treasure…He didn’t need to kill hisself to find it after all. It lied at his’n feet all along,” Jake sighed biting his lip and took a deep breath as he wiped his eyes. Sam squared his shoulders, turned and headed back to the homestead and the evening’s chores.