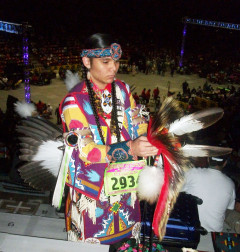 The Gathering of the Nations 2015 was breathtaking. Held in the Pit at Albuquerque UNM’s Basketball Arena, it was very difficult to come up with a picture that honored the participants of this event as they should be. It was nigh impossible to get photos that  even hinted at the elegant handiwork of the costumes each wore. Each one was more breathtaking than the last.

I recall working with a Navajo chief back about 1977-80 on the first Gathering of the Nations. I had no idea how spectacular this event would become. It’s too late this year, but I strongly suggest that anyone who honors Native American events take the time to search out PowWows of this type.