Oh, how easy it is to give up. You struggle and claw your way forward and it all looks so hopeless…

Just when you’re sure that all is lost, you enjoy a break through.

I was reminded of this universal truth today, when I watered my kitchen-table garden. Some weeks ago, I planted an avocado seed. Two healthy looking stalks emerged. Each day I turned the pot half around so they’d grow up straight and tall; and, each day they leaned dramatically into the morning sun that streamed through the east window in what seemed to be a mystical dance..

Then one day, something happened. It looked like the top of each stalk had been nipped (My cats took an awful scolding. Not seeing any other explanation, I reasoned that one of them must have bitten off the tip of each stalk.) Normally, I would have just tossed out the plant without a second thought. It looked like there But, for some unknown reason, I left it just as it was….and continued watering and waited. 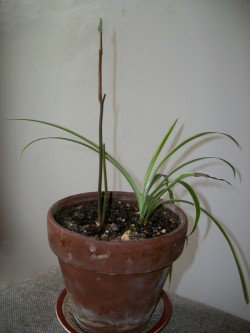 My patience has been rewarded.  I’d noticed that one of those stalks has remained fairly static. It hasn’t withered up and died. But it hasn’t really grown either.

But just look at the other one.. It’s about doubled in height …you can actually see the point where the stalk had been damaged and stunted, and a new shoot sprouted right next to the tip. 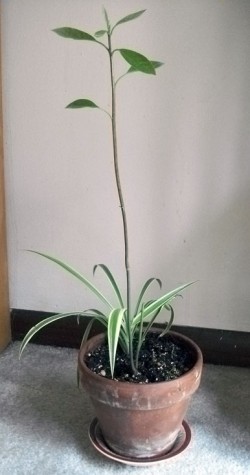 If you look at this second picture you can see the point where the tip had been damaged AND the new leaves that are now beginning to burst forth.

Now, I’m going to watch this a lot more closely. It looks like at various points along both stalks new growth is beginning. I’ll take another picture for this blog when the Avocado gets further developed.

By now, you know that I have a habit of making connections between nature and life as we experience it from day to day. This blog post will be no different.

Last night President Obama announced that Bin Laden is finally dead!  This bitter campaign has lasted nearly 10 years. Many have criticized our leaders for their ineffective handling of the matter while the war waged on and our President dealt with such stupid shenanigans as demands for his birth certificate. But without fanfare, he continued to do his job.

Countless people are still un-employed. Many of them are getting really desperate at this point. When will relief come? We don’t know for sure, but things are starting to happen…much is going on in the background. Diagrams of America’s employment status demonstrate that slowly, but surely, jobs are being created. We can hope that relief will come to those in waiting soon.

Women understand that babies don’t sprout overnight into tiny bundles of joy and bear the wait and the pain of birth…and then work tirelessly for another 18 or so years for that oh-so-tiny bundle develops into a young adult.

Writers, too, have similar experiences. Many a writer complains about writer’s block. You’ll hear some complain that “I’ve lost my voice”.Outsiders, may assume that the writer is playing around, taking a vacation, or just being lazy. Too often, less experienced writers will give up. It’s not an easy task to sit patiently by while the subconscious unravels.

That time of waiting is important in all the facets of our lives. Gardeners understand that. They clear a plot of dirt, and prep it. Then they plan the seeds. If you’ve ever done this, you may have marveled at just how presumptuous it is to expect those tiny non-descript specs to germinate and mature into the flowers, fruit, vines bushes and trees that delight us throughout the Spring, Summer and Fall.

And yet, the gardener knows the delight of taking that leap of faith and the rewards that come from their labors. Seasoned writers understand that the subconscious is their friend; they will set aside their work on purpose allowing their work to mature enough to be exposed to the world. Writers do understand that ideas that grow into words and thence into stories is a painful process.And they. Mothers understand that same pain and reward in birthing and nurturing. And even in our politics the process is enacted.

That’s the nature of creation. It’s a  hurry-up-and-wait, information-glutted world we live in, where the quick fix is glamorized,. But if we just “hide and watch” the lessons are clear. Creativity is a process. Just when you think that all is lost…just beyond that point where you want to give up…success will burst forth right there in front of you. You can’t hurry it up.

So, if you’re interested in creating something really new and exciting in your life….go ahead and do it. Just be careful you don’t throw the plant out before it has a chance to grow. …